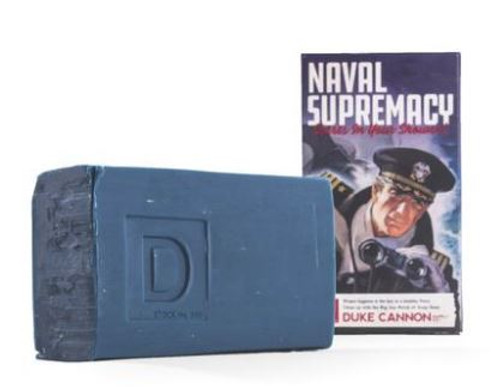 IN A WORLD OF WEAK HANDSHAKES, HERE'S A FINGER-CRUSHING INTRODUCTION.

Duke Cannon hails from a simpler time. A time when the term handyman was redundant. A time when chivalry and patriotism weren’t considered old- fashioned. A time when you never put the word salad next to bar.

But something happened along the way. Men were encouraged to put down their lug wrenches and pick up their phones to hashtag for help. Substance was replaced by the flash of guys taking selfies. And instead of getting up before dawn to build railroads, men started going to the gym at 9 a.m. to ride pretend bicycles.

As any historian worth his salt will tell you, this country was built by folks with a sense of purpose. Duke Cannon’s purpose is simple: to make superior-quality grooming goods that meet the high standards of hard-working men. Our products are tested by soldiers, not boy bands. And they’re made in a little place we like to call the United States of America.

We value things like hard work, family, community, bacon and country; we champion builders, creators, sledge hammerers, holders of doors and fixers of toilets; we have the utmost respect for teachers and farmers and soldiers and first responders—so it’s no wonder good folks feel right at home in Duke Cannon Country.

The rectangular “brick” shape and large size of Duke Cannon’s Big Ass Soap was inspired by the product issued to G.I.’s during the Korean War. (Our modern version retains similar dimensions, but smells a little better than its predecessor.) In fact, is produced today in the same U.S. based, family-owned plant that was the primary supplier to the military during that era.

Today we continue to gain inspiration from the fine soldiers serving our country by partnering with active duty military stationed at Fort Ripley in our home state in Minnesota as well as those currently deployed abroad in some of the world’s harshest environments.

While big corporations pay MBA’s to conduct months of focus groups, we simply work with our liaisons in the Armed Forces to inspire new ideas and review any all new products before they launch. Simply put, if it doesn’t meet the high standards of the men in uniform, it doesn’t happen.

COMMITMENT TO GIVING BACK

DUKE CANNON SUPPLY COMPANY IS SERIOUS ABOUT ITS COMMITMENT TO GIVING BACK TO THE MEN AND WOMEN SERVING OUR COUNTRY. THAT’S WHY A PORTION OF OUR PROCEEDS DIRECTLY SUPPORTS VETERAN CAUSES.